Was Jane Eyre Plain or Pretty?

Some readers of The Eyre Hall Trilogy have considered that my Jane Eyre is too beautiful, arguing that Charlotte Bronte drew an ugly, or at least plain young girl.

Jane Eyre had quite a few antagonists in her autobiography, some of which were also her direct enemies, and therefore described her negatively.

For instance, her Aunt Reed called her ‘deceitful’ and said she had a bad character, and the servants at her aunt’s house said she behaved like a ‘mad cat’.

Her cousins, Georgina and John, called her ‘impudent’, ‘rat’, and ‘thief’.

While Jane was at Lowood Institution, Mr. Brockelhurst called her a ‘liar’ and ‘evil’, however that doesn’t mean any of these descriptions were true. In fact we know there were plenty of liars in Jane Eyre, who seemed to revel in demeaning her, leading to her obvious lack of self-esteem throughout most of Jane Eyre.

We know Jane was honest, sensible, generous and intelligent.

When she arrived at Thornfield Hall, Mr. Rochester refered to her as ‘plain’ on more than once occasion.

Part of the misinterpretation comes from the use of the word ‘plain’ in the novel.The word ‘plain’ has led some readers to interpret that Jane was ugly, yet ‘plain’ does not mean ‘ugly’.

What does ‘plain’ mean in Jane Eyre?

Let’s look at a few examples:

Mr. Brocklehurst’s daughter, Augusta, says of the girls at Lowood,

‘Oh, dear papa, how quiet and plain all the girls at Lowood look, with their hair combed behind their ears, and their long pinafores, and those little holland pockets outside their frocks—they are almost like poor people’s children!

Here plain clearly means that their clothes and hairstyle is simple and poor. Brocklehurst’s daughters were wearing curled hair with ribbons, and dresses with lace and trimmings. The girls at Lowood were ugly because they were plainly dressed.

In the following extract, Jane herself says she dresses plainly because she is poor,

I rose; I dressed myself with care: obliged to be plain— for I had no article of attire that was not made with extreme simplicity.

Plain is also used in the novel to mean ‘unvarnished truth’ Mrs. Fairfax is described as addressing Jane with ‘plain friendliness’

When Jane Eyre arrived at Thornfield Hall, she was a poor, naïve, unworldly young girl, who had lived within the walls of Lowood institution for eight years. Jane was indeed poor and plain because she had no money and very little self-confidence or knowledge of the world.

When Mr. Rochester said she was plain, he meant it as ‘no frills’, simple, poor, and honest. He didn’t mean she was ugly.

Plain is used to describe her clothes, hair, etc. as simple, with no adornments.

Yet, when she first arrives at Eyre Hall, Rochester calls her a ‘nonnette’ which is a small gingerbread cake made of honey and usually orange marmalade. That’s hardly an ugly thing. It suggests reddish tinges to her hair, small, and sweet.

When Rochester says, in his famous marriage proposal,

‘You—poor and obscure, and small and plain as you are—I entreat to accept me as a husband…’

He is echoing her words, meaning he loves her just as she is. She’s not wealthy, or from a noble family, or stunningly dressed, as Blanche Ingram (in the picture below) was, but she is honest and unspoilt. He loves her the way she sees herself, not only as he sees her.

In fact, once Rochester has proposed, her self-worth has changed drastically. Jane calls herself beautiful. The following morning she says,

While arranging my hair, I looked at my face in the glass, and felt it was no longer plain: there was hope in its aspect and life in its colour; and my eyes seemed as if they had beheld the fount of fruition, and borrowed beams from the lustrous ripple.

Later, when she goes downstairs to speak to Mr. Rochester he says,

‘Jane, you look blooming, and smiling, and pretty,’ said he: ‘truly pretty this morning. Is this my pale, little elf? Is this my mustard-seed? This little sunny-faced girl with the dimpled cheek and rosy lips; the satin-smooth hazel hair, and the radiant hazel eyes?’ (I had green eyes, reader; but you must excuse the mistake: for him they were new- dyed, I suppose.)

Later, when Jane has fled from Thornfield Hall on discovering that Mr. Rochester is married, and that his wife is lodged in the attic above her room, she meets her cousins in Morton.  While Jane is staying at Moore House with her cousins Mary, Diana, and St. John, she tells Diana,

‘And I am so plain, you see, Diana. We should never suit.’

Jane has once more lost her self-esteem. She is telling Diana that she is not worldly or sophisticated enough to be her cousin’s wife, but Diana replies,

‘Plain! You? Not at all. You are much too pretty, as well as too good, to be grilled alive in Calcutta.’

There is no doubt that Jane was a short and thin young girl, probably due to lack of nourishing food, in an Institution where many girls dies of sickness and malnutrition, but I also have no doubt that she would have grown into the beautiful, healthy, intelligent and confident woman, who appears in my novels. 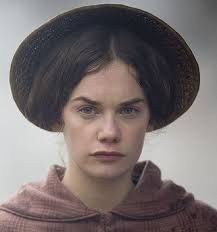 In The Eyre Hall Trilogy, Jane has grown into a wealthy and self-assured woman, so she has the clothes, jewels, security, and intelligence to be beautiful. I have maintained her physical characteristics, she is short and slim, her eyes are still green, as she says they are in Jane Eyre, and her hair is auburn, as Rochester described it, too.

Jane is as beautiful in The Eyre Hall Trilogy as she was in Jane Eyre, if some readers didn’t capture her beauty that, it’s their problem, not mine or Charlotte Bronte’s!

I am in love with a lady who has lively green eyes, pale cream skin, rosy round cheeks, smooth wavy auburn hair and soft coral lips.

One of my favouriter actresses to play the part of my mature Mrs. Rochester, is Rachel Weisz.

My favourite description of my Jane Eyre, is found in Twelfth Night at Eyre Hall, when Charles Dickens visits Eyre Hall and gifts us with this eloquent description of the mature Jane Eyre, the woman I’m sure she would have become,

We sat drinking brandy after dinner by the fire. It was a restful moment after such an intense conversation. I examined my host. Jane’s pale complexion and delicate frame stood in stark contrast to her confident movements and assertive manner, which denoted a remarkable strength and serenity of character. Her flawless features fit perfectly in her heart–shaped face. Her dainty fingers and soft hands caressed her dress distractedly as she watched the fire. Her russet hair was tamed with several pretty hair clips, and her inquisitive green eyes held a gentle gleam when they rested on mine. She was one of those fortunate women who grow more beautiful as they age. Her voice was soft and melodious and her manner charming. It was a pleasure to be in her company.

So, Dear Reader, do you still think Jane Eyre was ugly?

12 thoughts on “My beautiful #JaneEyre”