Dragon’s bidding, to include in the story:

I begged him not to go.

‘I’m defending my honour,’ he claimed. ‘I demand satisfaction. I will not be insulted publicly, by that pompous idiot.’

I insisted that it was illegal, that it would end both their political careers.

‘No-one will see us. We will go to the cliffs below Weehawken on the Hudson River.’

I reminded him of his family, and his political future.

‘He deserves to be taught a lesson. He won’t get in my way again.’

I finally implored him to decline as a tribute to our friendship. I couldn’t watch him die.

‘Neither of us wants to die. We’ll both intentionally miss, although I’ll try and shoot the rascal’s foot off!’

I knew Hamilton wouldn’t shoot to kill, but I also knew that my brother-in-law was hungry for vengeance.

The first shot flew above Burr’s head, he smiled at me.

I wonder if one of the six Fathers of the Nation imagined he would be shot down in a duel by one of his political adversaries?

Hamilton was a self-made man, who was born out-of-wedlock, raised in the West Indies, and orphaned at 11. He was sponsored by people from his community to go to the North American mainland for his education, where he attended King’s College (now Columbia University) in New York City.

Hamilton was an able and brave military officer, who served in the American Revolutionary War as artillery captain. He later became the senior officer and confidant to General George Washington, the American commander-in-chief.

Hamilton’s abilities were not only military, he was also a competent politician and economist. When President Washington appointed Hamilton as Secretary of the Treasury, he created the government-owned Bank of the United States.

The First Bank building, which was built in 1795, is now a National Historic Landmark located in Philadelphia. 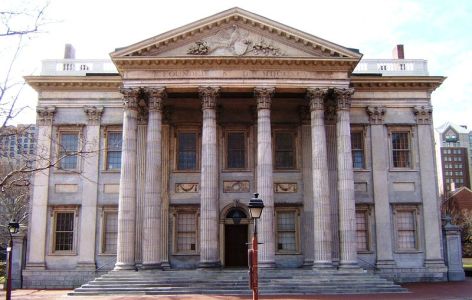 He resigned from office in 1795 after a extra-marital scandal, and practiced law in NY. When Burr ran for President, Hamilton supported Thomas Jefferson, because he accused Burr of being unprincipled. When Burr later ran for governor in New York State, Hamilton’s influence was strong enough to prevent Burr’s victory once more.

Burr challenged Hamilton to a duel, after taking offense at some of his comments.

Hamilton was mortally wounded and died the next day, 11th of July, 1804.

A modern reader is amazed at how two fifty-year-old men, of their intelligence and social prominence, should take part in a duel, in an attempt to kill each other, in such an absurd, and illegal manner.

Although Burr was never tried for the illegal duel, because all charges against him were eventually dropped, Hamilton’s death put an end to Burr’s political career.