I grew up in London where I graduated in Modern languages and moved to Spain, where I earned a PhD Thesis on Language Acquisition. I’ve taught English language and literature at schools and Universities in Spain until I took early retirement in 2019 to have more time for my literary pursuits. I live with my husband in Córdoba and I have three children and six grandchildren.

I’m happiest when I’m spending time with my children and grandchildren. When I’m not reading or writing, I’m taking watching YouTube videos, learning German (my daughter and two grandchildren live in Germany), taking photos, cooking, or going for long walks.

I’ve been fascinated by everything to do with Victorian England since I was a teenager, thanks to Sister Catherine who first introduced me to the mischievous Victorians when we read The Lady in White by Wilkie Collins, aloud in class.

My favourite Victorians are Mary Wollstonecraft Shelley, The Brontes, George Eliot, Arthur Conan Doyle, Robert Louis Stevenson, Wilkie Collins, Thomas Hardy and the poets Byron, Keats, Wordsworth, Oscar Wilde, Tennyson, the Brownings, Christina and Dante Gabriel Rossetti, and a very special mention to Charles Dickens, my very favourite Victorian author and person. The writers themselves, as well as their beloved characters, pop up, one way or another, in all my novels! Mr Dickens makes a stellar appearance in Twelfth Night at Eyre Hall and he has a significant role in Thunder Moon at Eyre Hall.

I would never have felt the power of prose, if I had not read Jane Eyre, when I was an impressionable and romantic thirteen-year-old. However, I would never have fully appreciated Jane Eyre, if I had not read Wide Sargasso Sea thirty years later, when I was an active and overrun mother of three teenage children. Finally, I would never have had the idea of writing this novel, if I had not taught Postcolonial Literature in English to undergraduates, whose lively discussions and thought-provoking questions ignited my overactive imagination. As a result, both novels merged in my mind to re-emerge by my audacious pen. My humble and sincere tribute to both literary giants, who contributed to make me not only the writer I am, but also the person I have become.

While I was writing The Eyre Hall Series, and mainly due to some readers’ comments regarding my ‘unjust or inaccurate’ portrayal of Edward Rochester, I started wondering what would happen if the events in the novel occurred nowadays. How would contemporary readers react to the events? My fertile imagination imagined Ghost Wife, my latest novel, to be published in July, 2022. 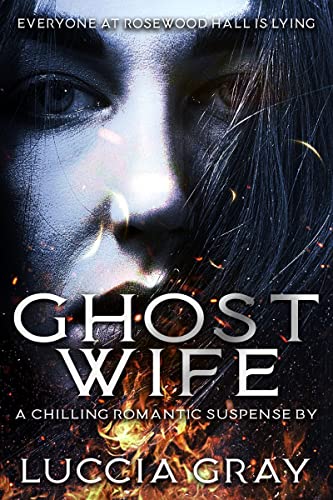 Lyra Leyton is sleeping on a friend’s couch after losing her job as an English teacher at a language school in Spain. When she receives a lucrative employment offer as home tutor and live-in nanny to 10-year-old Carla, at Rosewood Hall, in Yorkshire, she can’t believe her luck.
Life at the secluded residence is idyllic at first, until disturbing sounds from the attic, cryptic messages from an anonymous sender, and a visit from a private investigator searching for a missing girl, haunt Lyra’s sleepless nights.
A panic-stricken Lyra, hands in her notice, but Carla’s widowed stepfather, who lives in London, begs her to reconsider, claiming wild animals, local gossip, and creaking noises in the ancient house, have caused her unrest.
If Lyra stays, she could lose more than her mind, but can she afford to leave? And can she abandon her young pupil?

I hope you enjoy visiting my blog, Rereading Jane Eyre, where you will find articles on Victorian Literature, especially posts about Jane Eyre, and information about my writing and reading pursuits.

I also post about things that interest me such as book reviews, poems, flash fiction, and motivational posts.

You will also be able to read updates and information about The Eyre Hall Series. It started as a trilogy, but I couldn’t stop! Read all about it on my Home Page.