Letter ‘P’ is for Dominic Piper, author of Kiss Me When I’m Dead

Why do I recommend Kiss Me When I’m Dead?

Kiss Me When I’m Dead is a contemporary detective novel narrated in the first person, present tense, stream-of-consciousness style, by witty and shrewd Daniel Beckett, in the classic style of Raymond Chandler and Dashiell Hammett.

The use of language is so skilled that every single paragraph, page, and chapter moves the story on, or tells us something about Beckett and the array of characters who come to life. Nothing is wasted, every word kept me alert, as I was literally immersed into Beckett’s mind, and rushed around London, encountering an eclectic array of unconventional, and often larger than life, characters. There were times I thought I was living inside a comic, others it was like watching a film by Howard Hawks, except often it was more like Tarantino, with plenty of action and sex, although neither is graphic, which I was grateful for.

Finally, the plot is full of twists and turns, most of which I didn’t even suspect. I  didn’t realise how perfect the title of the novel was until I read the last chapter. Kiss Me When I’m Dead is a fun and exciting ride. I loved it!

What kind of reader would like Kiss Me When I’m Dead, Dominic?

Kiss Me When I’m Dead seems to attract the attention and appreciation of people who would never usually read a detective novel of any sort. They are surprised by the wit and particularly the personality of the main character, womanising private detective Daniel Beckett. But Beckett’s womanising is not of the sleazy, alpha-male variety and I think this is why many female readers like the novel and like him. Beckett, as a person, is quite a mystery and reveals nothing about himself. He has a skill set that alludes to an unusual, possibly sinister past. What that past may be is left up to the reader to decide, though there are clues everywhere. One review mentioned that the novel was ‘beautifully written’, which I was pleased to see. I take care over the words I use and try to put interesting pictures in the readers’ minds.

What are you working on at the moment?

I’m currently writing the second novel featuring Daniel Beckett. This doesn’t have a title yet, as that’s usually the last thing I think of. I keep having to check back to the first novel to get various details of Beckett’s life consistent. That was a problem I didn’t face with the first one as it was all new. I’ve drawn a couple of flow charts detailing the plot, but I rarely stick to it. It’s more interesting for me if I don’t really know what’s going to happen. Often, some random event or comment will take the plot in a totally new direction. This is what happened when I was writing Kiss We When I’m Dead. It’s tempting to make a follow-up a kind of ‘part two’ of the first one, particularly when it’s been critically acclaimed, but I hope I’m avoiding that. I’m starting out of the window a lot. 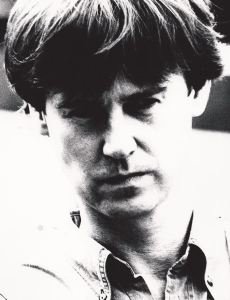 That’s a good question. Whenever I’m reading books, I prefer to know nothing about the author as I don’t think it’s important. I’m aware that many authors write about themselves and their own experiences, but I’m not one of those. There’s been a boom in indie publishing since it became easier to do, and I often notice that a lot of indie writers are writing about personal issues that are often mentioned in their biographies. I don’t think I’d ever do that as I don’t think it exercises the imagination enough. Part of the fun of writing for me is making huge imaginative leaps into worlds that you have no experience of and hopefully those leaps will excite and stimulate the reader.