If you enjoy reading Victorian Gothic fiction, with plenty of romance, mystery, action, and suspense, you will love Twelfth Night at Eyre Hall, the second volume of The Eyre Hall Trilogy, which chronicles the lives and vicissitudes of the residents of Eyre Hall from the beginning to the height of the Victorian era. 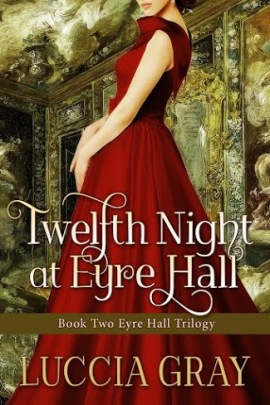 Following Edward Rochester’s death, Jane Eyre, who has been blackmailed into marrying a man she despises, will have to cope with the return of the man she loved and lost. The secrets she has tried so hard to conceal must be disclosed, giving rise to unexpected events and more shocking revelations.

Romance, mystery, and excitement will unfold exploring the evolution of the original characters, and bringing to life new and intriguing ones, spinning a unique and absorbing narrative, which will move the action from the Yorkshire countryside, to Victorian London, and across the Atlantic Ocean to Colonial Jamaica.

I was convinced I would never see him again. I had tried unsuccessfully to expel him from my thoughts, but he was always there, haunting my dreams and slipping into my mind during the day.

The morning after Twelfth Night, I had planned to leave London and return to Eyre Hall. I was having breakfast by the hearth at the inn, when someone crept up behind me and sat down in the chair to my right. I looked down at his unsteady hands, fearing he wished me no good.
“Michael, I done it. I killed him.”

“Will you be responsible for Mr. Mason’s permanence in this house as one of the undead?” I roared impatiently.
“What is it you want?”
“To see the corpse and absorb his sins, of course.”

John stopped before a small casket which looked out of place inside a large niche positioned on the lower level, at the end wall of the vault, below Edward’s, and read, “Infant Eyre Rochester. May 1855.”
He smiled at me, “Do not faint now, mother. You are going to see your baby again, at last.”

Hours later, we were woken by a wild raging storm, which tossed our ship mercilessly like a seashell on the shore. My whole body was shaken and turned inside out. It seemed my entrails desired to escape the storm by tearing out of my body. I looked out of the tiny port hole and saw a huge mass of water and dark objects spinning like a whirlpool, and I was thrust back against my desk.