This post is part of this year’s April Challenge to write a post a day. I’ve chosen to write about my greatest literary passion: Jane Eyre. Today it’s all about Jane Eyre’s Dresses. Jane will tell us all about the clothes she wore.

While I was at my aunt’s house in Gateshead, I was treated as if I were a servant. I had to dust and clean every day, so I wore a pinafore over a simple stuff dress. On the other hand, my cousins, Eliza and Georgiana Reed, wore nicer frocks, especially at Christmas and on Sundays when they’d dress in thin muslin frocks and scarlet sashes. I didn’t mind not having their clothes, I didn’t like colorful sashes anyway, but I wondered why I always left out of all the enjoyment and fun. I usually spent my time with Bessie in the kitchen.

When I moved to Lowood, I wore ugly, old-fashioned, brown stuff frocks with long Holland pinafores with pockets. I still dislike brown. 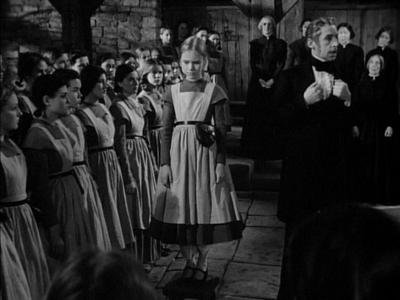 The teachers dressed smartly, although they also wore drab colours, especially the dreaded brown. They also wore narrow tuckers made of lace around their necks and shoulders. They had large pockets, like a Highlander’s purse, tied in front of their frocks, as a work- bag. They also wore woolen stockings and country-made shoes, fastened with brass buckles. I thought they looked ugly.

Miss Temple dressed differently. She was more fashionably than the rest. She often wore a purple dress with black velvet trimming, and she was the only one who wore a gold watch tied to her belt, which shone like the sun.

I disliked Mr. Brocklehurst’s wife and daughters, who looked down at us with their splendid  silk dresses with velvet trimmings and furs. I would never dress like them, even if I had all the money in England. 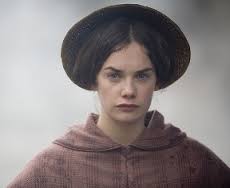 When I arrived at Thornfield, I was wearing my black stuff travelling-dress, a cloak, a bonnet, gloves, and a muff.

Months later, when I met Rochester, while I was on my way to post a letter in Hay, I noticed he ran his eye over my dress, to try to decide who I might be. I was wearing a simple black merino cloak, a black beaver bonnet. He must have wondered if I was a maid. When I told him I was the governess, he smiled and said, ‘of course.’

The first day Mrs. Fairfax told me Mr. Rochester, would like me to have tea with him, she warned me to change my frock. I replaced my black stuff dress with my best black silk dress. I had another slightly better dress, a light grey one, which I had worn to Miss Temple’s wedding. I thought it was too fine to be worn, for tea. I wore it some months later, when his extravagant guests arrived, with the object of teasing me, as I would later learn.

When his Mr. Rochester’s wealthy and ostentatious friends were invited to Thornfield, my drab, dull, and plain clothes, made me feel even more self-conscious and plainer than I was. They wore crimson velvet robes, shawl turbans of gold-wrought Indian fabric, white muslin dresses and coloured sashes, pink and white satin robes, silk stockings and white satin sandals.

Adele normally wore a brown frock, except when there were guests or when Mr. Rochester gifted her a dress. Mr. Rochester is especially fond of red and pink dresses. He bought one for Adele from France, and wanted to buy me one, months later, when he proposed, but I’ve never liked pink. I told him I would not be dressed like a doll with bright colours, diamonds, or furs.

Clothes should be comfortable and practical, and the colours should be pleasing to the eye. Sashes, ribbons, and expensive jewellery are an unnecessary and pretentious extravagance.

I have worn too many stiff, stuff dresses not to appreciate the smoothness of satin and silk, which are my favourite materials. I prefer woolen coats to furs. My favourite ornament is the pearl; it’s the only type of necklace I would let Mr. Rochester buy me.

My favourite colours are sky blue, pearl grey and black, in that order. I’ll never forget the pale blue dress I was wearing when Edward recovered his eyesight. It’s still my favourite colour.