This post is part of this year’s April Challenge to write a post a day. I’ve chosen to write about my greatest literary passion: Jane Eyre. Today I’m going to tell you about the symbolism regarding necks and necklaces in Jane Eyre.

Necks and Necklaces in Jane Eyre

Necks are important in Jane Eyre, they symbolize pain, love, and worldly riches and grandeur.

“John no one thwarted, much less punished; though he twisted the necks of the pigeons, killed the little pea-chicks, set the dogs at the sheep…”

“I felt a drop or two of blood from my head trickle down my neck, and was sensible of somewhat pungent suffering: these sensations for the time predominated over fear, and I received him in frantic sort.”

“…returned in half a minute, carrying in her hand a bundle of twigs tied together at one end. This ominous tool she presented to Miss Scatcherd with a respectful curtesy; then she quietly, and without being told, unloosed her pinafore, and the teacher instantly and sharply inflicted on her neck a dozen strokes with the bunch of twigs. Not a tear rose to Burns’ eye…”

“ I was taken from Bessie’s neck, to which I clung with kisses.”

“I learned that Miss Temple, on returning to her own room at dawn, had found me laid in the little crib; my face against Helen Burns’s shoulder, my arms round her neck. I was asleep, and Helen was—dead.”

“I remember Adele clung to me as I left her: I remember I kissed her as I loosened her little hands from my neck.”

“…and, after examining your apartment, ascertained that you had taken no money, nor anything which could serve as an equivalent! A pearl necklace I had given you lay untouched in its little casket; your trunks were left corded and locked as they had been prepared for the bridal tour.”

Mr. Rochester wore it himself around his neck (under his cravat) as a reminder of Jane’s love:

“Do you know, Jane, I have your little pearl necklace at this moment fastened round my bronze scrag (neck) under my cravat? I have worn it since the day I lost my only treasure, as a memento of her.”

“They both threw their arms round his neck at once. He gave each one quiet kiss, said in a low tone a few words of welcome”

“The muscular hand broke from my custody; my arm was seized, my shoulder—neck—waist—I was entwined and gathered to him.” 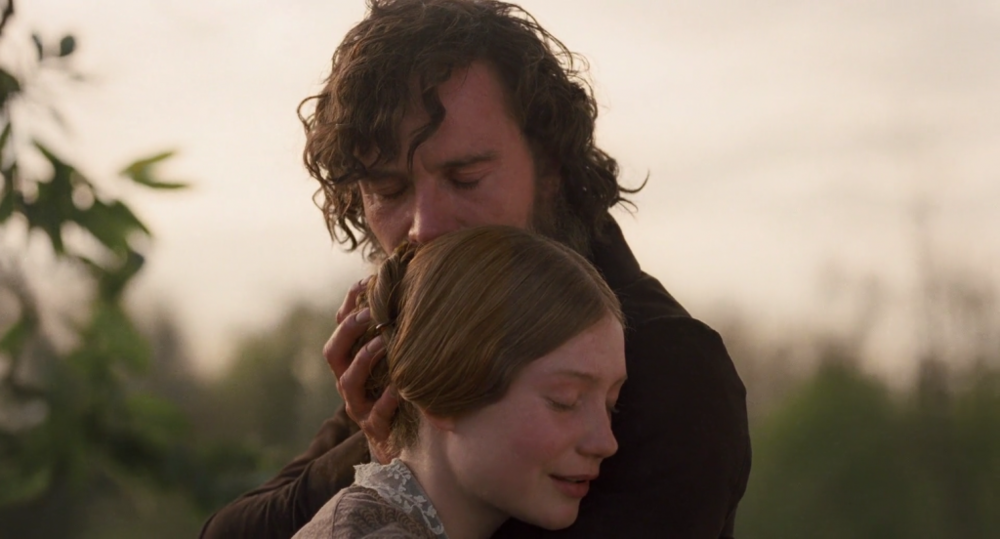 “Traversing the long and matted gallery, I descended the slippery steps of oak; then I gained the hall: I halted there a minute; I looked at some pictures on the walls (one, I remember, represented a grim man in a cuirass, and one a lady with powdered hair and a pearl necklace), at a bronze lamp pendent from the ceiling, at a great clock whose case was of oak curiously carved, and ebon black with time and rubbing.”

‘I will myself put the diamond chain round your neck, and the circlet on your forehead,—which it will become: for nature, at least, has stamped her patent of nobility on this brow, Jane; and I will clasp the bracelets on these fine wrists, and load these fairy- like fingers with rings.’

“I encountered the beads of a pearl necklace Mr. Rochester had forced me to accept a few days ago. I left that; it was not mine: it was the visionary bride’s who had melted in air. The other articles I made up in a parcel; my purse, containing twenty shillings (it was all I had), I put in my pocket: I tied on my straw bonnet, pinned my shawl, took the parcel and my slippers, which I would not put on yet, and stole from my room.”

“Jane, have you a glittering ornament round your neck?”

I had a gold watch-chain: I answered ‘Yes.’

In this case, we can assume that Jane has bought and chosen her necklace, because it was the first time he had seen it.

Jane told us that Miss Temple’s gold watch hung from her girdle, probably with a string or cord, yet Jane’s hands from a gold chain around her neck. Jane has reached and surpassed her childhood idol, Miss Temple.

The gold chain lets her Dear Reader know that Jane has finally acquired the social status she dreamed of by her own means, and on her own terms. She is not wearing an heirloom, but a  jewel she has chosen and bought herself, in this case a gold necklace.

8 thoughts on “Letter N #AtoZChallenge Necks and Necklaces in #JaneEyre”