This post is part of this year’s April Challenge to write a post a day. I’ve chosen to write about my greatest literary passion: Jane Eyre. I’m going to tell you about the Prequel to Jane Eyre written almost a century after Jane Eyre was published.

Although my main inspiration in writing The Eyre Hall Trilogy was Jane Eyre, its prequel, Wide Sargasso Sea, written over a hundred years later by Jean Rhys, has been almost equally responsible. Both novels are complimentary and it is their combined stories, which have led to my sequel, The Eyre Hall Trilogy. 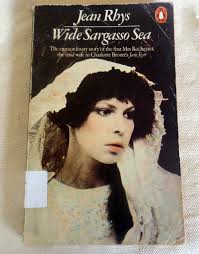 I read Wide Sargasso Sea, about thirty years after reading Jane Eyre. This short, but intense novel, which was written in the 1960s, tells the story of Bertha Mason in three parts: her childhood, before she met Mr. Rochester, their first meeting and arranged marriage and first four years of matrimony, and finally her death at Thornfield Hall.

Jean Rhys was born in Dominica, an island of the British West Indies to a Welsh doctor and a third-generation Creole of Scots ancestry. She must have understood Bertha Mason’s feeling of alienation in England herself, as she says in this eloquent quote:

Rhys’ novel tells the formerly untold story of Bertha Antoinette Mason from her birth in Jamaica to her death at Thornfield Hall.

Antoinette who was silenced, imprisoned, and abused in Jane Eyre, is given a voice and a life, a real life, in Wide Sargasso Sea; a life Charlotte Bronte insinuated but never told. In Wide Sargasso Sea Antoinette tells Rochester; “there is always the other side, always”, and that is the story Rhys weaves in Part One which Antoinette narrates.

Edward Rochester narrates Part Two and is shown up as the shady, unscrupulous character he became in Jane Eyre. His elder brother was to inherit the Rochester Estate, so his father arranged a marriage to a rich Jamaican heiress for Edward, his second son, or the ‘spare’. Rochester disliked Jamaica and although his wife was beautiful, he was not aware that she was Creole, and it displeased him, especially after marrying her and disposing of her generous dowry.

When he inherited the Rochester Estate due to both his brother and father’s sudden deaths, he decided it was time to return to England. That was when he locked Bertha away in a windowless, cold and damp attic, claimed he was unmarried and went gallivanting to France, as he himself admits to Jane.

The Third and Final Part is told once more by Antoinette, who not surprisingly, after ten years in an attic, has become the ‘madwoman in the attic’. She supposedly burns Thornfield Hall, endangering the lives of the rest of the occupants, and commits suicide.

Gilbert and Gubar’s seminal study on feminist literary criticism, Madwoman in the Attic, was written in honour of Bertha Mason. I’ve written several posts on this topic in previous posts on this blog:

My fascination with these two novels escalated when I taught Postcolonial Literature to undergraduates at the University of Córdoba. One of the topics on the syllabus was a comparison of Jane Eyre and Wide Sargasso Sea, and that really sparked classroom discussion and my imagination. The idea of reinstating the first Mrs. Rochester, Bertha Mason, had been nagging at me for a long time, until I decided to reinstate Bertha Mason by bringing her daughter to life and back to the Rochester Estate in my Sequel to Jane Eyre, The Eyre Hall Trilogy.