Today I’m posting my review of Behind Her Eyes, by Sarah Pinborough, a suspenseful and chilling, psychological thriller.

I read many good novels and some great novels, but sometimes I’m lucky enough to find a novel that draws me in with its intensity and shocks me with its plot. Behind Her Eyes It will never be my favourite novel, because I’m an incurable romantic at heart, but it will certainly be an unforgettable novel I highly recommend.

This novel is referred to as a ‘suspenseful and psychological thriller’, but it’s much more than that. There’s family drama, romance, paranormal events, horror, and crime.

A very intense family drama is at the centre of the plot, and consequently there are times when the microuniverse created is too claustrophobic, but I think it’s the atmosphere the writer wanted to create, and in that sense it’s superbly achieved.

There are four main, all absorbing characters, and a few other minor ones, to support the plot and the main characters. At first, it appears to be a family drama including a love triangle, which is more of a quadrangle with three people in love with one person, whose inability to communicate does a great deal of damage to everyone involved.

One of the main characters is cruel, manipulative, larger than life, and a psychological enigma. The other characters were their own worst enemies, wrecked by their gullibility and lies. I kept wanting to shout at them, ‘just speak to each other and tell each other the truth!’

I witnessed a devastating fight between good and evil in this novel, and If there’s a message, it’s that lies can poison your life and your relationships, and corrupt your mind and your body.

One of my favourite films has exactly the same ending, albeit in a totally different setting and including distinct characters, but unfortunately for me, I was on track by the second half, which spoiled the shock, although I was still well and truly horrified.

The ending is especially chilling, and treads the fine line between the psychological and the paranormal, and there’s a strong dose of horror. I suggest readers be prepared to suspend belief, have an open mind and because they will be terrified to the very last line.

The plot is well woven and it’s very well written, drawing the reader into the minds of the characters by using alternating first person narrators. All the loose strands are finally, neatly tied up, but be prepared for a very unhappy and disquieting ending akin to the horror genre. I listened to the audible version which was superbly read by several different narrators.

In three words: intense, disquieting and unforgettable. I dare you to read it. 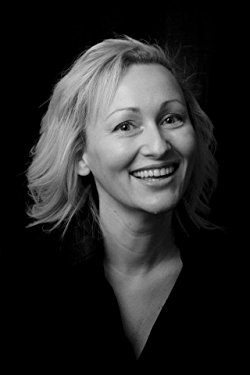 Sarah Pinborough is a critically acclaimed adult and YA author based in London.

Her next novel, Behind Her Eyes, coming for HarperFiction in the UK and Flatiron in the US (January 2017) has sold in over 20 territories worldwide and is a dark thriller about relationships with a kicker of a twist.

7 thoughts on “Behind Her Eyes by Sarah Pinborough, #BookReview #TuesdayBookBlog @SarahPinborough”