I read The Tenant of Wildfell Hall too many years ago, in my teens, when I read all the Bronte sisters’ novels, but I just couldn’t for the life of me remember much about the story. So, as the version I read, narrated by  Alex Jennings and Jenny Agutter was on Audible Included, which means that as a member, I could listen for free, I decided to have a go at the audio version. I wasn’t surprised when I was hooked immediately, I’ll tell you why right away. 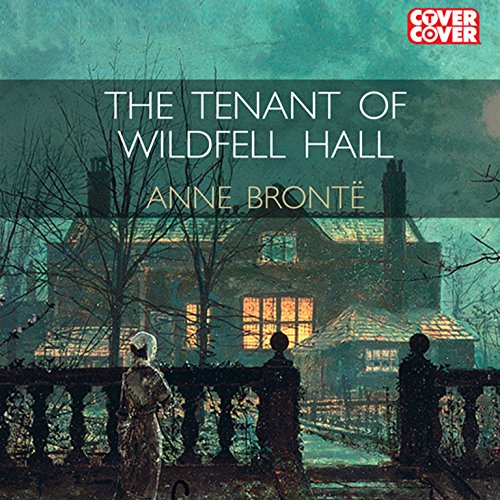 Fleeing a disastrous marriage, Helen Huntingdon retreats to the desolate mansion, Wildfell Hall, with her son, Arthur. There, she makes her living as a painter. Finding it difficult to avoid her neighbors, she is soon an object of speculation and gossip. Brontë portrays Helen’s eloquent struggle for independence at a time when society defined a married woman as her husband’s property.

Before I start my review, I’d like to tell you why I love Audible. I know I’ve told you many times already, but it’s even better now! My monthly credit allows me to buy one audiobook of my choice every month, plus there are daily deals and frequent sales and two for the price of one offers, plus there are loads of free listens in the ‘Included’ catalogue, which has new additions every week, and there are podcasts.

And I love to listen to audiobooks while I work out, go for walks, do the cooking, the laundry, the cleaning, clearing out cubboards, and much more! Here’s more information, in case you’re interested. (By the way, I have no commercial affiliation to Audible, I just wanted to share how great I think it is!)

The Tenant of Wildfell Hall was easy for me to enjoy. You all know how much I love Victorian Fiction, and as I had completely forgotten about the plot, it was like reading it for the first time.

It’s a very long, three volume novel, as was the custom of the time. It is over 800 pages and over16 hours of narration time. The Tenant of Wildfell Hall is the second and final novel by Anne Brontë, the youngest of the Bronte sisters. Her first novel was Agnes Grey, which I only vaguely remember, so I’ll probably be reading it again, soon, too.

The Tenant of Wildfell Hall was first published in 1848 under the pseudonym of Acton Bell. Although it was very successsful, it was considered the most shocking of the Brontë’s novels, and I can’t imagine why, because the main female character, Helen, is so very pious that she is at times quite nausiating. In fact, I was often furious with her subservient behaviour, especially in the third part of the novel, but more about that in a moment.

The first volume is narrated by Gilbert Markham (by the way, one of my new favourite romance heroes!), who is telling his friend about how he came to meet the Tenant of Wildfell Hall. He was intrigued and fascinated by Helen Graham, a beautiful and aloof, young widow, who moved into the crumbling, old Hall, with her young son, Arthur. They do eventually (very eventually), become friends, but then she becomes the target of local gossip and it is discovered that she is not a widow, because her husband is alive.

The second volume is narrated by Helen, who gives Gilbert all the letters she wrote from when she met her husband to the moment she left him. Here she shows herself to be a devoted wife, who is in love with an unworthy husband, and although she put up with a lot of psychlogical and some physical abuse, she was finally strong-willed and determined enough to abandon him.

This part of the novel certainly gives us a clear insight to the life of the country gentry and servants of the era, as well as the submission of women, even wealthy women, to their husbands,  fathers and religious notions of women’s piety.  I both pitied and admired Helen at this point, because I thought I was going to read a 19th century, #MeToo novel, and I almost did, but as I read the third part I discovered I was wrong.

This third part, narrated by Gilbert, describes how she returned to her husband and what happens afterwards, but I won’t spoil it for you by telling you how the ending comes about. I will tell you I was exasperated with both Gilbert and Helen, and her brother, but especially with Helen, for being so obstinate and submissive. So, although I did enjoy the ending, I found it was not the feminist novel I had been expecting to read.

A modern editor would have reduced the novel by half, even I, lover of Victorian literature, was impatient for something to happen and maddened by the going round in circles of the same events, and long drawn out conversations, which did not move the plot forward a single inch!

There are two major difficulties in reading this type of Victorian fiction, for the modern reader; in the first place the excessive length, verbosity and repetition of certain parts, and on the other hand, the cultural and emotional distance, with contemporary readers. The later makes it hard to understand or sympathize with their passive acceptance of patriarchy, gender differences and medieval attitude to religion, and the former can become frustrating.

However, there was one aspects that reminded me of contemporary society; harmful and spiteful gossip and blatant lies, which still occurs today, except nowadays it would spread on social media, instead parlours and at sunday service.

I would recommend the audio version, because it brings the characters and events to life and makes the tedious parts more enjoyable (and you can speed them up!).

I hope I haven’t put you off, because it really is worth reading. The prose flows smoothly and the vocabulary and expressions are gorgeous, and you will be rewarded with an authentic, first-hand glimpse of what life was really like for women, men and children, in Victorian England.

Have you read The Tenant of Wildfell Hall? What was your impression?