Many things have been happening during these bloggingly silent months, and I have an important announcement to make.

There are seven days to go to the launch of Book 3, Midsummer at Eyre Hall, on the 21st of June, and I’m aiming to write a post a day to celebrate my achievement. 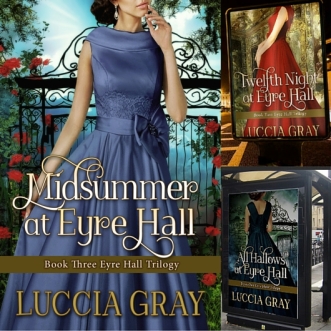 The idea of writing a sequel to Jane Eyre in order to revindicate Bertha Mason and uncover Rochester’s real nature, opening many eyes, including Jane Eyre’s, had been taking shape in my imagination for a few years before I put pen to paper.

On a warm, sunny day, towards the end of June 2013, I sat in my garden with my brand new PC, and started pantsing my novel.

I had a location: Thornfield Hall had been burnt down and Jane had inherited a great deal of money from her uncle, so she had built another more modern country house on the same spot: Eyre Hall. It had neither an attic nor a rookery.

I had a setting: Twenty-two years after Jane and Rochester’s marriage, while Rochester is on his death-bed.

I had an antagonist: My first scene was crystal clear; Richard Mason would arrive at Eyre Hall, causing havoc in Jane’s life once again. He was Bertha’s brother, the man who had interrupted Rochester’s first bigamous marriage attempt in Jane Eyre.

I had the catalyst: This time he had a more shocking revelation. Bertha had given birth to a baby girl in the attic, whom Richard had removed to Jamaica under Rochester’s orders. Annette Mason was twenty-two years old and ready to claim her birthright. Annette is the most vital character in the novel. Without Annette there would be no Eyre Hall Trilogy.

I had the anti-hero: Rochester was responsible for Jane’s ‘unhappy marriage’, and the tragic events which will ensue, due to his crimes and misconduct.

And of course  I had my dear protagonist: Jane Eyre. She is the link to all the other characters and events. The trilogy is concerned with the way in which she will react to the events and other characters, and how her fate will develop as a result.

My characters were strong and well-defined in my mind, so I just made them interact and talk to each other and the story gradually grew.

My first surprise was that more characters appeared of their own accord, right from chapter one. The most significant was an unplanned and unexpected hero, who emerged, and practically took over my novel and Jane’s life, on page two; Michael.

More characters appeared, interacted and events started to get out of hand. I soon realised two things I hadn’t counted on:

So about a third of the way into book one, All Hallows at Eyre Hall, I planed the rest of the first novel and outlined the next two, Twelfth Night at Eyre Hall and Midsummer at Eyre Hall. Needless to say, my early plans have changed drastically along the way, but even though plans change, you need a plan as well as an open mind.

It’s been a fascinating adventure. Months of research, reading, rereading, writing, rewriting, editing, discussing, fretting, and 280,000 words later, I have finished my journey, or not?

6 thoughts on “7 Days to Launch Midsummer at Eyre Hall: On planning and pantsing”