Over the past months I’ve been reading a great number of motivational and inspiring books on the topic of personal growth. I’ve also been listening to podcasts and watching videos on YouTube. This interest has sprung from a combination of factors as I’ve recently reached a few significant milestones in my life; I retired and turned sixty and I have five grandchildren between the ages of three months and nine years. I am concerned with aging, health, and emotional wellbeing, as well as my children and grandchildren’s future challenges. I have more time to reflect and more things to reflect on, so I’ve found these books, podcasts and videos very helpful, especially in these uncertain and volatile times in which nothing can be taken for granted. I’ll be sharing my thoughts with you on Mondays.

This Monday I’m sharing my experience of reading The Five Second Rule by Mel Robbins. 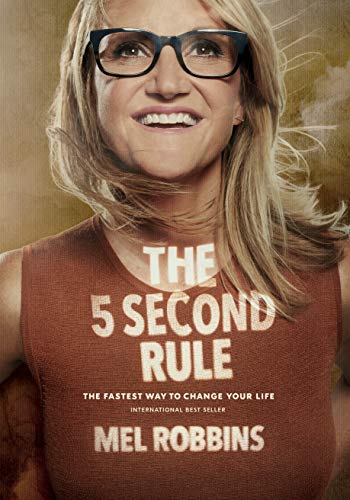 The Five Second Rule will tell you how to enrich your life and destroy doubt in five seconds!

I first came across Mel Robins about six years ago when I saw her TED Talk, which has almost 25 million views on Ted alone, although it is also available on other platforms such as YouTube.

Mel is a brilliant speaker because she puts her point across simply and clearly and she also backs everything she says with science and research. She’s the perfect mixture of humour and wisdom. She makes everything sound simple! Just listening to her makes you want to get up and go!

However, I hadn’t read her book, The Five Second Rule, published in 2017, until very recently.

Her proposal in The Five Second Rule is simple, but that doesn’t mean it’s easy, because it isn’t. Knowing what we should do and doing it. is in fact probably the hardest thing we will have to do. I love this quote, in which she says ‘you’re never going to feel like starting to do ‘hard’ things, such as getting up early, doing exercise, etc. We will always put it off for ‘tomorrow’ or make excuses, ‘I’m too tired today’, ‘I’m too busy’, etc. We are all expert procrastinators. 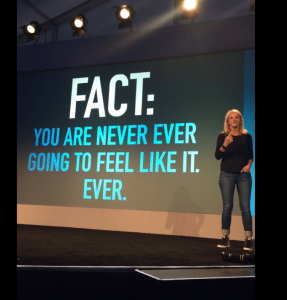 On the other hand we often search for a mentor, teacher, coach, or friend, to encourage or guide us and help us with our problems or to fulfil our desires. That’s another form of procrastination. By giving someone else the power, you let go of your own emotional strength.

Mel insists that we should take the initiative and push ourselves and she gives us a simple strategy to break the laziness or lack of initiative which prevents us from doing what we really want to do.

Our lives belong to us and the choice is ours and so is the power. Her book offers us the tool to empower us any time we feel we are losing control of our lives or our emotions. Even if we don’t feel like it, we need to get out of our lethargy, stop making ecuses and ‘Do it anyway.’

However the key isn’t knowing about it, it won’t work unless you make yourself do it.

How? Well that’s what the The 5 Second Rule is all about.

According to the blurb, the five second rule will help us, become confident, break the habit of procrastination and self-doubt, beat fear and uncertainty, stop worrying and feel happier, and share your ideas with courage.

Mel’s proposal is based on two main concepts, psychologist Julian Rotter’s the locus of control (1954), which, simply put, refers to people’s perceptions of the individual power they think they have to control their actions and what Mel refers to as the power of the push and the five-second rule, which provides the push people need to take control of the moment and act.

It’s a fabulous book and I encourage you to read it, but there are other ways to hear about Mel’s proposals, as well as her Ted Talk, she has many Audible exclusive lessons or podcasts such as her latest publication, which I’ll soon be listening to, exculusively on Audible called, take control of your life 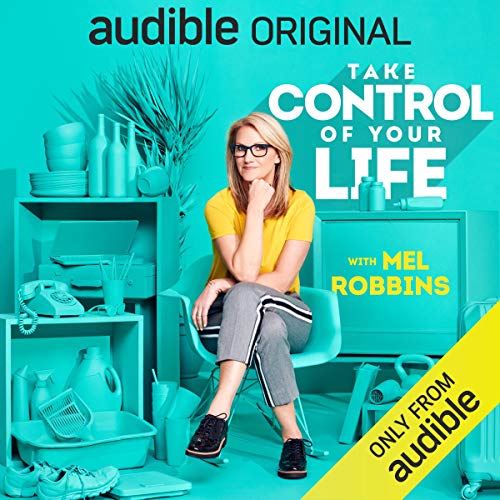 This is an Audible exclusive series of sessions or podcasts in which Mel Robbins addresses topics such as anxiety, fear of change, rejection, and loneliness, imposter syndrome and feeling trapped in the wrong career, and relationship problems. There’s an accompanying PDF available after purchase.

Mel also has a strong presence on YouTube. If you want to listen to her own explanation of her life journey, the five second rule, and other ways you can improve your life, you can listen to and watch her in an interview on YouTube which was filmed two weeks ago,

Mel also has a YouTube channel which I’m subscribed to. Her channel has tons of short, vlogger type videos as well as longer videos and live streams about her life and thoughts, where she tackles personal issues such as fear, forgiveness, stress, etc. Check it out, I bet you’ll find something helpful and entertaining.

And remember, as Mel tells us: