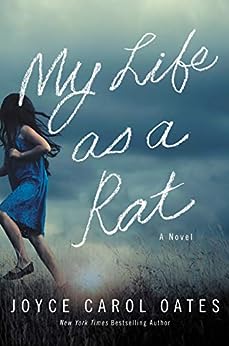 I’m a bit behind with my reviews. I’ll be catching up gradually. Today, I’m starting with the last book I’ve read, which is My Life as a Rat by Joyce Carol Oates.

I am ashamed to admit that although I have read some of her poems and posted about one of them here, I had never read any novels by this author. Then a few weeks ago, I read an interview with the author about her new novel, in the Guardian, and my interest was peaked, but when I read the reviews on Goodreads and Amazon, I was almost put off. I say almost, because I’m an avid reader, reviewer and writer, and I know how subjective most reviews are.

Some of the negative terms which appeared were, too long, repetitive, slow, disappointed, disorganised, violence, abuse, disturbing. That made me realise it would not be an easy book to read, but I decided I was up for the challenge.

I started reading the book on my Scribd subscription last Friday, and I couldn’t stop until I finished it on Sunday night. It’s hard to introduce other readers to such a brilliant book in a few hundred words, but I’m going to do my best. 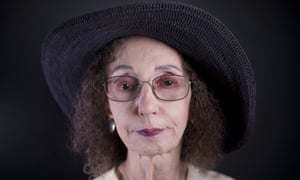 My Life as a Rat is a heart-rending novel which deals with topics such as, abuse, domestic violence, ignorance, racism and gender inequality.

It presents these topics honestly and brutally, so much so that some people may feel uncomfortable, or even disgusted. Well this isn’t a light romance, this is a raw and harrowing view of a segment of the population. Extrapolating Violet’s town, family and life to every woman in the world would be absurd, even though Violet is not the only girl who has lived or lives so close to so many ignorant and/or evil people.

In spite of everything Violet experiences, I find the novel hopeful because the reader is led to believe there is an implicit answer to the senseless violence, lack of love, gender inequality, racism and ignorance, and that’s Violet’s attitude to adversity: learn the lesson, get up and move on! That is to say she persevers, she tries to do the right thing, she actively searches for a better education, she wishes to accept her responsibility in events, forgive herself and others and repair whatever she can, and especially, she never loses the ability to keep reaching for her dreams.

Violet is a wonderful character who never gives up, she’s bigger than the events she overcomes, because she’s able to move on, keep loving and forgiving, and I think she stands a good chance of finding happiness, perhaps, one day…

A must read for anyone who wants to understand what’s wrong with our society and how we can find ways to heal and be reconciled.

I’m joining in Shelley’ Wilsons’s Friday Book Share with some suggestions for entertaining books to read for the weekend.

First line from the prologue: The wind flicks wet hair across her face, and she screws up her eyes against the rain.

A tragic accident. It all happened so quickly. She couldn’t have prevented it. Could she?

In a split second, Jenna Gray’s world descends into a nightmare. Her only hope of moving on is to walk away from everything she knows to start afresh. Desperate to escape, Jenna moves to a remote cottage on the Welsh coast, but she is haunted by her fears, her grief and her memories of a cruel November night that changed her life forever.

Slowly, Jenna begins to glimpse the potential for happiness in her future. But her past is about to catch up with her, and the consequences will be devastating . . .

Jenna is a talented artist who lacks self-esteem and has suffered physical and psychological abuse.

Readers who enjoy crime fiction (there’s a crime and some police procedural) and  family drama (be warned it includes an accurate and realistic portrayal of abuse), with a touch of romance and lots of suspense. It’s well-written and character-driven. There are switching viewpoints which add more depth to the story. Especially for readers who like intense and moving novels.

I read the paperback version. Here’s a photograph of a scene which is vital to the suspense element in the novel:

Want to join in sharing a book you enjoyed?

Anyone can have a go – all you need to do is answer the following questions based on a book you are currently reading/finished reading this week and use the hashtag #FridayBookShare. Grab the banner on Shelley’s blog.

I took part in the first link up of #1000Speak on February 20th 2015. The intention for that day was to get a thousand bloggers together and spread compassion around the world.

The idea evolved, and there have been monthly prompts on compassion on the 20th of every month for a whole year, and today is the anniversary of the first link-up.

In today’s celebration of compassion, our prompt is to talk about how the year has been for us as a result of taking part!

I haven’t taken part regularly. I’ve written six posts over the past year which you can check out here on Compassion in Jane Eyre and Victorian England, on Forgiveness, Anti-bullying, and Nature and Nurture. I’ve also popped in to visit other bloggers posting on the subject, and I’ve retweeted on Twitter and Facebook. I do feel a tiny part of the movement, although I haven’t been consistent enough in my posting or interaction to feel strongly part of a group. I’ll try to take part more often this year 🙂

As I’ve missed some of the prompts las year, today I’d like to write about a beautiful prompt I missed in October, on LOVE.

I was always told at school that two wrongs don’t make a right, and that, as Martin Luther King said, hate cannot drive out hate, only love can do that. I didn’t fully understand what it meant at the time. I think my Catholic upbringing might have confused me somewhat, with the ‘turn the other cheek’ philosophy, and I’m now sure that this is not the correct approach.

Turning the other cheek is a passive act, although it detracts some of the power from the aggressors, it does nothing to show them that their behaviour is unacceptable, because there is another better way to solve our problems.

If someone is being unjust or cruel, as in bullying or abuse, I am now convinced we should react actively, albeit peacefully, by telling the person we do not agree with their actions, or by showing them another way to approach the situation, and if all else fails, by making sure help is provided for those who need it.

In Martin Luther King’s case, peaceful protests, made it clear that segregation was wrong, and that it would no longer be tolerated. Turning the other cheek would have been the equivalent of accepting injustice submissively.

As a teacher, I have taken part in mediation programmes which enable students to express how they feel and negotiate peaceful ways to solve their problems. When mediation doesn’t work, and the aggressor refuses to reconsider and repair the situation, there are school rules and disciplinary measures which are enforced. I would not expect, or even allow, any child to turn the other cheek.

Similarly, when a colleague, is behaving unreasonably (and this happened recently), I suggest other ways to solve the conflict or approach the problem, which involve, listening, discussing, and negotiating solutions, which will improve the situation for all parties. What I’m not prepared to do is to ignore the situation.

We each have our own limited sphere of influence in the world, where we interact socially and professionally, and in mine, I’m not prepared to turn the other cheek, or allow anyone to turn the other cheek, because I believe #1000Speak is about speaking up because we believe in promoting compassion actively, and that means making sure compassion is discussed, and peaceful alternatives are put forward actively to make the world a better place for everyone.