Over the past months I’ve been reading a great number of motivatioal and inspiring books on the topic of personal growth. I’ve also been listening to podcasts and watching videos on YouTube. This interest has sprung from a combination of factors as I’ve recently reached a few significant milestones in my life; I retired and turned sixty, and I have five grandchildren between the ages of three months and nine years. I am concerned with aging, health, and emotional wellbeing, as well as my children’s and grandchildren’s future challenges. I have more time to reflect and more things to reflect on, so I’ve found these books, podcasts and videos very helpful, especially in these uncertain and volatile times in which we can take nothing for granted. I’ll be sharing my thoughts with you on Mondays.

This Monday I’m featuring a book which has enlightened me in my goal-setting strategies called Having It All, written by John Assaraf.

Having It All gives us the tools to achieve any type of goal we have will take you from where you are to where you want to be.  John Assaraf started with nothing, in fact it was less than nothing, because when he was young he became part of a gang and was involved in petty crimes, until he met his mentor and his life gradually improved to one of outstanding success. In the first chapters, he tells us about his early years and his life before he realized his capacity to change and achieve his goals.

Today John Assaraf is one of the leading mindset and behavioral experts in the world. John has built 5 multimillion dollar companies, written several New York Times Bestselling books. He also took part in the documentary, “The Secret”.

I listened to the audiobook which has the advantage of listening to the author himself giving us specific and helpful advice with useful strategies to identify your goals, eliminate obstacles and achieve our dreams, using both conscious and practical approaches, as well as the power of our subconscious minds to develop empowering success habits. 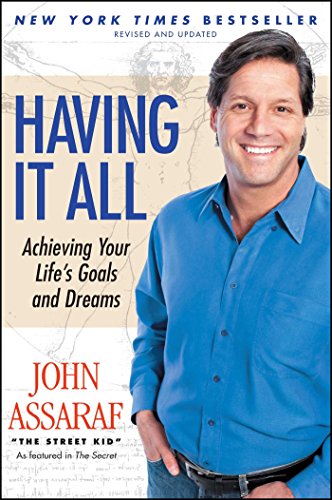 I took several pages of notes as I listened to his book, but I’ll just tell you about a few of the proposals which most inspired me.

He reminds us that every goal starts as a thought and inspires us by stating that if we have a desire, we also have the ability to achieve it.

He urges us to identify our goal, but we must be specific, use precise language and formulate it in the present tense as an affirmation. Then we should visualise it happening during our daily meditations in order to transfer it to the subconscious mind, as part of our daily rituals.

Then he identifies 7 power factors to achieve the goal: Persistence, attitude, discipline, vision, focus and action, which we can only carry through if we revise our daily habits and create new ones which will focus on actively achieving our goals.

We also need to revise our implicit and explicit beliefs related to the goal, which could be acting against us as negative blocks. We should identify our negative beliefs and reformulate them in a positive manner to create a new belief.

He explains it himself in the following YouTube video.

I found his book helpful in my goal setting. He made me see the difference between being a goal setter and a goal achiever. I did feel that sometimes the examples were too focused on goals involving financial gains, whereas I would have liked more proposals regarding creative endeavours.

Becoming wealthy has never been a goal in my life, but I can apply his proposals for other types of goals, such as being a successful author.

What are you doing this Sunday?