This Tanka is for Colleen Chesebro’s challenge.  This week we are using synonyms of ‘bewitch’ and ‘treasure’.

Picture taken in the Hall of the Hotel Real in Segovia, Spain.

Seduced by a Star

Even playing the villain

Spellbound by his wit and charm

Cary Grant, Sophia Loren and Frank Sinatra, among others, stayed at the Hotel Real in Segovia, Spain, in 1956, while filming The Pride and the Passion (1957). 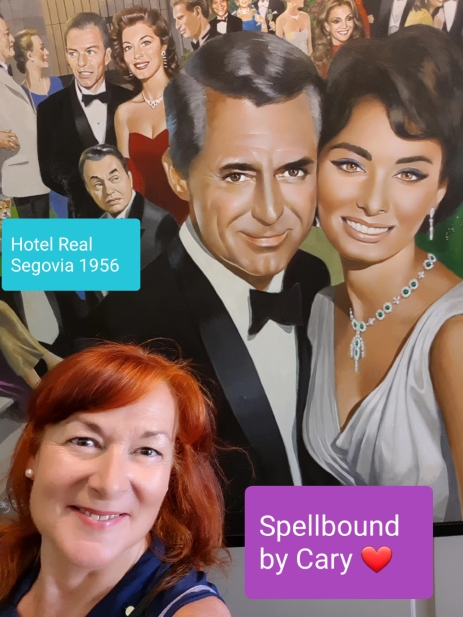 Cary, who was married at the time to Betsy Drake, fell in love, or lust, with Sophia during the filming, but she was in love with Carlo Ponti, whom she married shortly after.

Rumour has it that Cary continued to pursue Sophia during subsequent films in which they co-starred, but Sophia is said to have rejected him every time.

View from the rooftop, Hotel Real in Segovia

I didn’t know about any of this when I arrived at the hotel, I hadn’t even planned to stay in Segovia. It was a last minute decision on my way home to Cordoba. I was naturally thrilled to find so much memorabilia in the hotel and to imagine that these two actors walked along the hall, perhaps up the stairs, and looked out over the roof top terrace to see the very same view of the city I saw a few days ago.

I’m aware thar Archie Leach was far from a perfect gentleman, but Cary Grant will always be my favourite actor, because I’ll never tire of watching Charade, North by Northwest, My Cousin Rachel, Notorious, To Catch a Thief... all unforgettable.

By the way, Segovia is a magical city and I’ll be posting more pictures of my visit tomorrow on ‘Sunday Walks’.

Would you like to take part? The rules are simple.

17 thoughts on “#TANKA TUESDAY #POETRY CHALLENGE ‘Seduced by a Star’”