National Poetry Writing Month is a poetry writing challenge to write a poem a day, which takes place every year in April. Follow the link to find out more, be inspired, get daily prompts and meet other poets!

For Day 9, I’m joining in with Charli Mills weekly Fash Fiction challenge to write 99 words exactly based on her prompt. On this occassion, the topic is ‘Fire’ and I’ve written a 99-word poem.

Click on the banner for more information about this weekly writing prompt!

The flame flickers in her eyes,

As the fire scorches her tiny fingers.

Before her stunned sight.

She enters a cosy drawing room

And presents wrapped in bow-tied boxes.

She smells the turkey cooking

Downstairs in the wood-fired oven.

She hears her grandmother calling,

Reminding her to lay the table

With porcelain plates and silver forks,

But the match burns her trembling hands,

Falling on the snow-covered pavement.

As day breaks over the icy city.

‘There are no matches left.’

This poem was inspired by Hans Christian Andersen’s poem, The Little Match Girl, first published in 1845, in Denmark.

Fortunately, there aren’t many children dying of cold and hunger in Denmark, or indeed Europe, today, but according to a 2018 UNICEF report, 3.1 million children under the age of 5 are dying every year as a result of malnutrition, so the struggle to erradicate child hunger and malnutrition in the world is far from over.

Are there any match girls in you part of the world?

National Poetry Writing Month is a poetry writing challenge to write a poem a day, which takes place every year in April. Follow the link to find out more, be inspired, get daily prompts and meet other poets!

For Day 7, I’m joining in with Sue Vincent’s weekly #Writephoto prompt. Writers and bloggers are invited to use the image as inspiration to create a post on their own blogs, poetry, prose, humour… light or dark, or whatever you choose.

Click on the banner for more information about this fun weekly writing prompt!

For visually challenged writers, the image shows the view from within a cave on the sea shore, looking out onto a beach. There are the shadowy entrances of other caves across the bay and a waterfall tumbles down from the rocky cliffs.

She swims to shore, hides in cave,

In free country, but he lied.

Still a slave in a new land.

Hopes and dreams will fade

Into an endless dark night,

will swallow her youth and strength,

Many undocumented migrants try to enter richer countries illegally, with the help of globally organised traffickers who promise them a new and better life, but sadly, it’s often just a ploy. Many end up being exploited or even worse used as slave labour, unable to break free from their captors.

Small, unpopulated, seaside locations are often used to smuggle these vulnerable people into another country.

According to a recent article in Business Line, women are especially at risk, due to the demand for prostitution. Almost three-quarters of women and girls who are trafficked are sexually exploited, and 35 per cent are trafficked for forced labour.

There is plenty of news coverage about this issue. A very recent article in the Guardian called One in 200 people is a slave. Why? Gives us some shocking facts about modern-day slavery.

An article in Time magazine on March 14th 2019 called ‘It Was As if We Weren’t Human.’ Inside the Modern Slave Trade Trapping African Migrants includes more information on the topic.

It’s not an issue a single person, or group of people can solve, because it’s a complex, global concern, which needs to be addressed at an international, political level, but building awareness of this shameful practice is the first step towards helping those who are victims of modern-day slave trade. 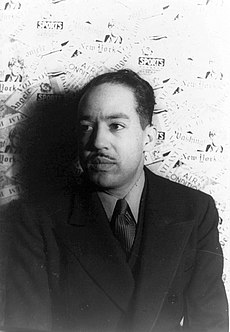 There’s a long history of the poetry of resistance, in which poets have spoken out about all kinds of social injustice. There’s more information on the Poetry Foundation in an article on Poems of Protest, Resistance, and Empowerment

Here’s one of my favourite, by Langston Hughes at the Poetry Foundation

I look at the world

I look at the world

From awakening eyes in a black face—

And this is what I see:

I look then at the silly walls

Through dark eyes in a dark face—

And this is what I know:

That all these walls oppression builds

Will have to go!

I look at my own body

With eyes no longer blind—

And I see that my own hands can make

The world that’s in my mind.

Then let us hurry, comrades,

The road to find.

*
Langston Hughes, “I look at the world” from (New Haven: Beinecke Library, Yale University, ) Source: Poetry (January 2009)
*
Here is another contemporary poem about a child’s view of her refugee parents’ migration, by Naomi Shihab Nye from The Tiny Journalist.
*

*
Do you have a favourite social protest poem, or poem about human migration?

February 23, 2017 prompt: In 99 words (no more, no less) write a migration story. It can imagine the dusty or arctic trails of the frontiers past or look to the travel across the galaxy. What issue about modern migration bans might influence an artistic expression in a flash? Migrate where the prompt leads you.

Migrations can be voluntary, in search of a better life, but they can also be imposed. Starting a new life is always hard for a migrant, but even more so when it is imposed.

My migration story has taken me to Victorian England, where deportations to Australia, for certain criminals, were considered a cheap alternative to life sentences.

‘You’re Magwitch, the convict at the graveyard.’

‘Miss Havisham’s groom who abandoned her at the altar?’

‘He was imprisoned and I was deported to New South Wales.’

‘You tricked me into helping you.’

‘I’ve paid you back generously.’

‘I worked hard at the Penal Colony. My money is yours now.’

‘I don’t want your soiled money!’

‘Are you planning on giving up your fancy life and going back to being a blacksmith?’

‘You’ve ruined everything. I hate you!’

‘And yet, Pip, you have Estella to thank me for.’

Pip had always thought Miss Havisham had been his anonymous benefactress and he was horrified to learn his money had come from a criminal, but he later came to terms with Magwitch when he learnt more about his life and hardship, and finally looked after Magwitch in his final days, in prison, once again. This time Magwitch cannot leave him his money because it is confiscated, thus destroying Pip’s Great Expectations.

Great Expectations is an absorbing and complex novel. Magwitch, who is deported to New South Wales, for using counterfeit money, has a short-lived presence in the novel, yet his role is vital in the plot. He is a catalyst in Pip’s life.

Pip met Magwitch at a graveyard when he’s seven and is persuaded by the escaped convict to bring him food. Magwitch, who was grateful for the child’s help, improves Pip’s prospects by being his anonymous benefactor, enabling him to move to London and become a gentleman, instead of a village blacksmith.

Magwitch is also Estella’s father, whom we all know was the woman Pip loved and lost. Dickens wrote two endings to Great Expectations. In the ending which Dickens finally endorsed, on Wilkie Collins insistence, Estella and Pip are reunited in the final scene of the novel, with that famous line, in which Pip says of Stella:

‘I saw no shadow of another parting from her.’

During the 18th century, most prisoners were deported to penal colonies in America, but after the American War of Independence broke out in 1775, transportation was sent to Australia. Over the years, about 160,000 people, including men, women and children, sometimes as young as nine years old, people were transported to Australia. Most of them never returned.